According to the three-cell model, the circulation of each hemisphere is composed of three distinct cells: the Hadley cell, a Ferrel cell, and a polar cell. Thought more realistic than the single cell model, the three-cell model is so general that only fragments of it actually appear in the real world. Nonetheless the names for many of its wind and pressure belts have become well established in our modern terminology, and it is important that we undertint where these hypothesized belts are located. 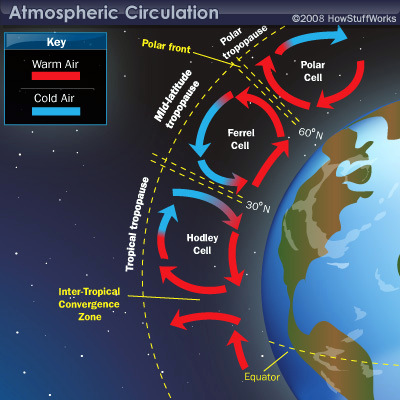 The Hadley cell is a thermally direct (hot air rises, cool air sinks) circulation along the equator where strong solar heating causes air to expand upward and diverge toward the poles, creating a zone of low pressure at the equator. This zone of low pressure is known as the equatorial low or the intercontinental convergence zone (ITCZ), it is the rainiest latitude in the entire world where winds can become light or nonexistent for extended periods of time (doldrums). Nonetheless, air in the upper troposphere moves poleward toward the subtropics at about 20° to 30° latitude. Upon reaching about 20° to 30° latitude, air in the cell sinks towards the surface to from the subtropical highs (large bands of high surface pressure). The pressure gradient force (PGF) directs surface air from the subtropical highs to the ITCZ where the weak Coriolis force deflects the air slight to the right (left in the southern hemisphere), forming the northwest trade winds (southeast trade winds in the southern hemisphere). 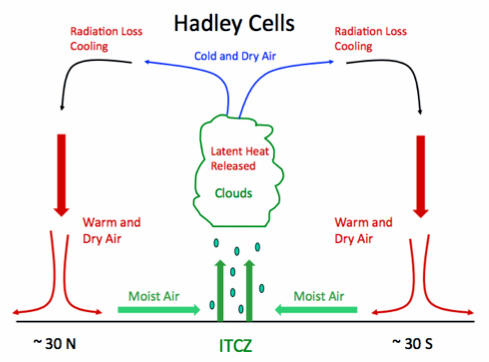 Immediately flanking the Hadley cell in each hemisphere is the Ferrel cell, which circulates air between the subtropical highs and the subpolar lows. On the equatorial side of the cell air flows poleward, the subtropical high then undergoes a deflection to the right (left in the southern hemisphere) due to the Coriolis force, creating the westerlies (easterlies in the southern hemisphere) wind belt. The Ferrel cell is considered a thermally indirect circulation (cool air rises, hot air sinks) meaning that, unlike the Hadley cell, this cell does not arise from differential heating but, instead, is caused by the turning of the polar cell and the Hadley cell.

Finally, the polar cell’s surface air moves from the polar highs toward the subpolar lows. At the subpolar location air is slightly warmer, resulting in low surface pressure and rising air. The very cold conditions create high surface pressure and low-level motion towards the equator. The Coriolis force, in both hemispheres, deflects the air to form a zone known as the polar easterlies in the lower atmosphere. Like the Hadley cell, this cell is also considered to be a thermally direct circulation (hot air rises, cool air sinks).

The Bottom Line:
─     The three-cell model is not realistic at all.
─     ITCZ is real enough to observed from space—many deserts exist in their predicted locations
─     Trade winds are the most persistent winds on Earth.
─     The Hadley circulation provides a good account of low-latitude motions.
─     The Ferrel and Polar cells are not quite as well represented in reality—though they do have some manifestation in the actual climate.
─     It is difficult to observe a persistent pattern of polar easterlies—they emerge in long-term averages, but are not a prevailing wind belt. 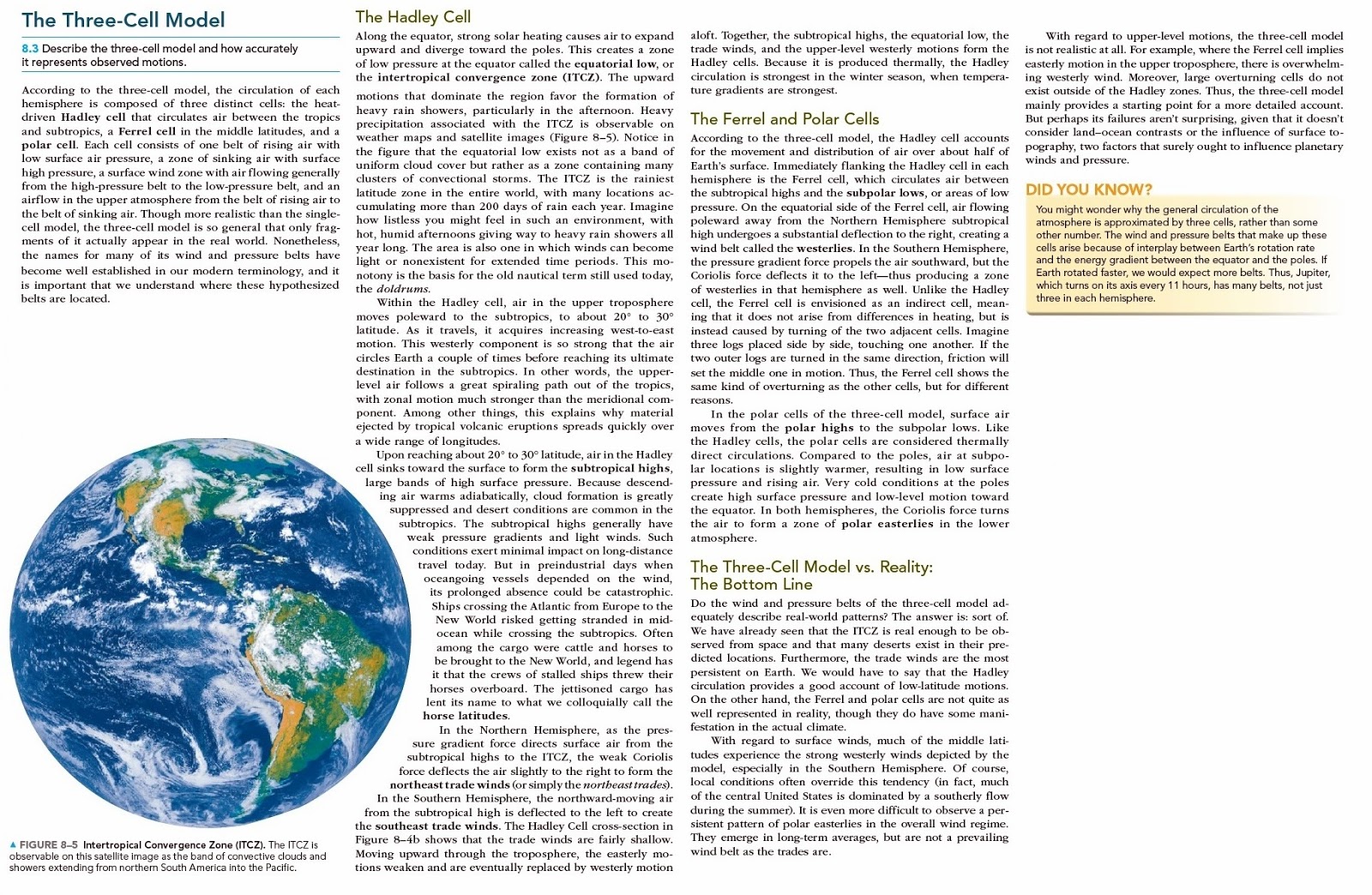